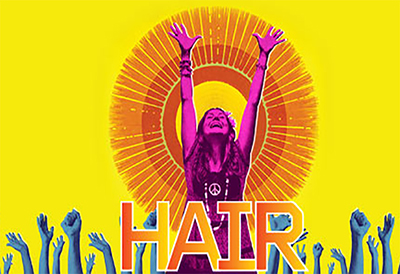 “This musical is a cross between a Dionysian revel and an old-fashioned revival meeting. [What holds HAIR together is] the score, which pulses with an insistent, primitive beat.”
HAIR, Time Magazine

“The music of Galt MacDermot has a basic, insistent rock beat, sophisticated and refined, sweetened and saddened, by all kinds of plangent overtones which I am not equipped to identify. Sometimes it is sung by a high, lonely, pure soprano, sometimes chanted in a low, hoarse, sexy whisper. Sometimes it erupts as a full-bodied, choral crescendo, sometimes pumps out as commercial, pop-group ballad.”
Alan Brien, The London Sunday Times 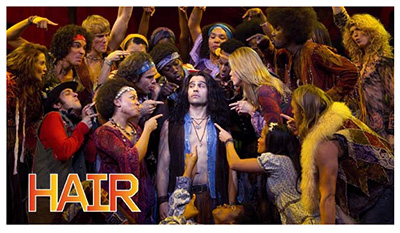 “The score by Galt MacDermot throbs with the sounds and rhythms and vitality that stand for everything that should be happening to Broadway show music.”
Alvin Klein, Broadway Review WNYC Radio

“HAIR went on to become the single most recorded show in history, with 726 recordings made from the score as of 1970. The Broadway cast recording spent weeks at the number one chart position and won a Grammy, and 4 songs recorded from the show reached number one on the charts.”
Billboard

“HAIR …a varied score by Galt MacDermot powered by that rock beat, only slightly adulterated by the demands of Broadway, that is in the very bones and nerves, it seems, of nearly every young American.”
Robert Kotlowitz, Harper’s Magazine 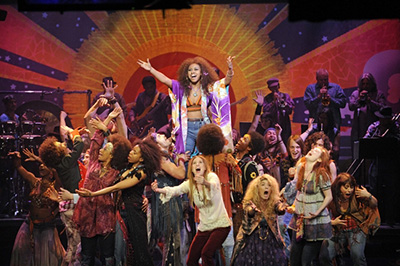 “But it is the music that makes HAIR more than just hippie, anti-war propaganda. Galt MacDermot's score, played by an onstage electrified combo, combines hard rock and soft lyricism in a fantastic display of musical know-how. HAIR is a musical for today, and long may it wave.”
Peggy Stockton, WMCA Radio

“…introduced (Jim and Gerry) to Galt MacDermot, who somehow understood and loved the kind of music they were seeking. Within 36 hours he had completed six songs and come up with a thousand ideas. Within four days the show had been completed and was ready for a producer.”
Circus Magazine

“But the music. The music, I say. There is something worth your money and that money is a bargain. When that gets going and the voices rise in song and the instruments beat it out, twice that and more would not be too much for a ticket. The composer, Galt MacDermot, is the hero of HAIR.”
Whitney Bolton, New York Morning Telegraph 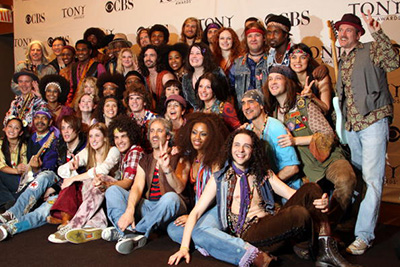 “I have called it a revivalist meeting, and Galt McDermot's music, ranging from ‘Moody and Sankey’ rhythms to strident rock, constantly emphasizes this aspect, binding fun-and-games to ritual.”
H.G. Kippax, Sydney Morning Herald

“The piece has, however, two sovereign qualities. The first is the music by Mr. MacDermot, which is rock and swingy… There was a rough, tough and lusty quality to the music…”
Clive Barnes, The New York Times

“Galt MacDermot's music is an adroit mixture of raga-rock with enough Broadway schmaltz to appeal to people who like The Sound of Music as well as the sound of music.”
Clive Barnes, Saturday Evening Post

“The music builds to a rock that never stops pulsating until the final curtain. In fact, after, because by then, the whole audience is clapping and stomping along.”
Mike Stein, WNEW Radio

“The score is far and away the season's best and most varied.” Henry Hewes, Saturday Review

“Now, at the 11th hour, I've finally found the best musical of the Broadway season...it’s that sloppy, vulgar, terrific tribal love rock musical HAIR...formerly of off-Broadway. Contrary to my expectations, it's even better on Broadway - Galt MacDermot's music is more imaboutive on second hearing - this is Aquarius.”
Len Harris, CBS-TV

“Coupled with the large dose of advance publicity, it is the music, Galt MacDermot's amalgam of pounding rock and Broadway melody that has propelled "HAIR" into its wide pre-acceptance. There are already nine "HAIR" LP's, and 60 groups have recorded songs from the show that are broadcast round the world.”
Newsweek 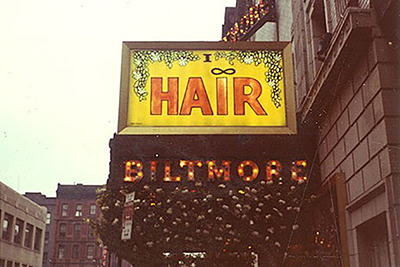 “But there is also a freshness, a zest, and a charged effervescence that no musical has had on Broadway this season.”
Stewart Klein, WOR-TV

“The music by Galt MacDermot breaks out of a routine rock pattern and brings contemporary musical life to the Broadway stage.”
Billboard

"MacDermot had a triumph with HAIR in which he set Hamlet's 'What a Piece of Work is Man' to an achingly beautiful melody."
Brian Scott Lipton, Theatermania 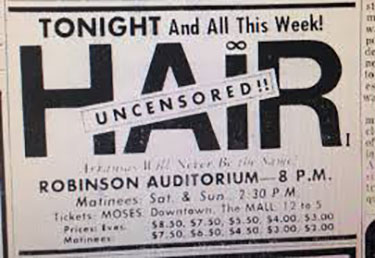 "The score is so much more significant than it seemed through the years. How did Galt MacDermot get so much detail into those tiny, unassuming little songs? -- each almost a tiny play."
Linda Winer, Newsday

First the answer to everybody's question: Yes, some of the actors and some of the actresses do face the audience totally nude. This little episode occurs in the finale to Act I. By the time it happens, you are more than prepared for it. In fact, you are prepared for anything.

You've seen actors writhe and crawl up the aisles in slow motion. You've been given flowers and confetti and corn thrown at you (sic). You feel you're entitled to combat pay for sitting so close to the stage. You've heard innocent looking girls use gutter language. You've seen actors swing out over you a la Tarzan... and you've hoped the rope would hold. You've leaned away from the aisle to avoid being clobbered by an actor riding a motorcycle up the aisle.

You've seen HAIR. Or perhaps I should say you've experienced HAIR. And it is quite an experience. The plot is minimal...something to do with avoiding the draft. What is far from minimal is the music. It is excitingly fresh...contemporary and moving. Part of that is due to the cast. They pretend to be hippies, but, if they are, they are the most talented hippies you'll ever see. And they've been directed in a wonderfully wild fashion by Tom O'Horgan.

Wild is the word for HAIR. It makes Marat/Sade seem like Peter Pan. It's more than a psychedelic be-in. It's the most theatrical theatre in years.
Allan Jeffreys, ABC-TV

LET THE SUNSHINE IN - THE GENIUS OF HAIR
by Scott Miller
"Shining, gleaming, steaming, flaxen, waxen"

In 1967, Hair launched a revolution. It rejected every convention of Broadway, of traditional theatre in general, and of the American musical specifically. It paved the way for the nonlinear concept musicals that dominated American musical theatre innovation thereafter. It also launched the careers of such actors as Diane Keaton, Melba Moore, Tim Curry, Peter Gallagher, and Ben Vereen.

HAIR remains one of the most important works in the history of the American theatre, and yet so many people know so little about it. Hair is so much more than its drugs and rock music and its famous nude scene. Without HAIR there would have been no Rent or A Chorus Line, no Jesus Christ Superstar, Chicago or Cats. HAIR changed everything. Drawing from the anti-war movement, the hippie culture, the experimental theatre community, the drug culture, rock and roll, the poems of Allen Ginsberg, and so much more, HAIR emerged in 1967 as one of the towering achievements of the twentieth century, a work of theatre so fully realized, so culturally significant, so shockingly real and honest, so iconically American that still today it retains its power to move and shock audiences, and to change forever the lives of those who work on it.